One of the joys of living at the bottom of the world in our beautiful country is the highways and roads can take you from the city to some of NZ’s amazing scenery, without need for four wheel drive vehicles.

One such road that starts a little more than one hour from the Western Bay of Plenty is State Highway 38. Travelers join the rural highway at Waiotapu, south of Rotorua, for a road trip that eventually ends in Wairoa in northern Hawke’s Bay.

Easy driving takes you through the timber town of Murupara and past the branch road to Minganui, which leads into the Whirinaki Forest Park. Whirinaki is considered to be one the world’s most precious rainforests, where conservationists fought to save a magnificent native podocarp forest. Today Whirinaki’s beauty is protected for everyone to enjoy through a comprehensive network of walks, tracks and huts.

While it is a number of years since we journeyed down State Highway 38, little has changed as one enters the Te Urewera National Park, with 90-odd kilometres of windy gravel roads. However, the beauty of the Urewera National Park and the magnificent vistas of Lake Waikaremona make the slow trip worthwhile.

You know you are in the heart of the Urerewas when you hit Ruatahuna, which is a sleepy little village near the upper reaches of the Whakatane river, surrounded on three sides by the Te Urerewa National Park. The area has a huge historical background having seen a lot of action during the Maori Wars of the 1860s and 1870s.

Te Urewera is the traditional home of the Tuhoe people, often referred to as the children of the mist. Due to its isolation, it was one of the last regions in the country to be colonised by the British in the 19th Century. Te Kooti found refuge from his pursuers among the Tuhoe, with whom he formed an alliance.

However, the jewel in the crown of the Urerewa National Park is Lake Waikaremoana. Rounding the winding narrow road, the first glimpse of Lake Waikaremoana literally takes your breath away. 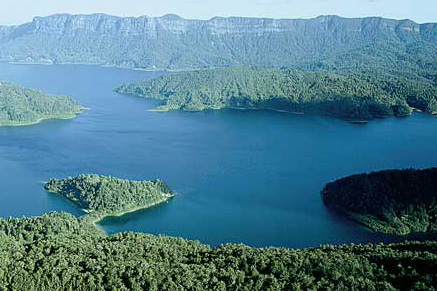 The Department of Conservation website states Lake Waikaremoana was formed only 2200 years ago by a huge landslide, which blocked a narrow gorge along the Waikaretaheke river. Water backed up behind the landslide to form a lake up to nearly 250 metres deep. The mountains and hills surrounding Lake Waikaremoana have been shaped by continuous erosion.

The vegetation of the Waikaremoana area forms a protective green cloak, mantling countless ridges and valleys. There are more than 650 types of native plant present in the park, some nationally rare. Many birds live in the forest. Among the more notable are kereru (wood pigeon), kaka (forest parrot), kakariki (parakeet), North Island robin, New Zealand falcon and rifleman; and at night, morepork (forest owl) and North Island brown kiwi.

While the road traverses around Eastern side of the lake, before dropping down to the hydro village of Tuai, and on to Wairoa in northern Hawke’s Bay – the region provides some of the best tramping and hunting in the country.

Whether stopping for the myriad of short walks scattered around the lake, undertaking the three-four day tramp, called the Lake Waikaremoana Great Walk, or fishing and hunting, Lake Waikaremoana provides something for everyone.

While it is somewhat remote and requires driving patience, State Highway 38 is well worth the trip – and should be added to one’s bucket list.